The benefits of aerial photography for gathering intelligence has been appreciated since flight was first used for military purposes. Not only could aerial photographs provide accurate details of troop deployment for tactical purposes, but they could also be used for strategic planning. This was done by tracing supply lines and production facilities. As the flying environment was hostile, regular cameras were of little use. This meant that specific models – with features like simplified adjustments and oversized controls – had to be introduced. This is where Thornton Pickard comes in.

Thornton Pickard was a pioneer of aerial photography and created a robust vertical camera with a plate changing mechanism (T-P Model C). The T-P Model C was used to photograph the front lines on a daily basis during WW1. The MkIII Hythe camera was also produced by Thornton Pickard around the same time, which could easily have been mistaken for a Vickers machine gun. Meanwhile, German manufacturers such as Zeiss Ikon and Ernemann produced similar products. During the conflict, it is thought that over half a million aerial photographs were taken.

The aerial cameras installed on aircraft were bigger and they could use larger film formats. This gave greater detail, although they were still restricted in terms of framing the target area. During WWII, film up to 9″ wide was used and lenses up to 40″ focal length were employed. Multiple camera setups could cover larger areas or provide stereo detail. The desire for more flexibility lead to the development of handheld cameras, which could be used quickly to photograph features or events without having to alter the flight path. A number of companies produced these cameras, such as Williamson and AGI for Britain and Fritz Volk for Germany.

The Fritz Volk is a camera of historical note, as it’s believed to be the camera the Swedish Government handed to Victor Hasselblad in the early 1940s asking him to make a copy of it. Hasselblad replied, saying: “No, not one like that, but a better one.” All in all, 240 HK7 cameras were supplied to the Swedish military, This exercise lead to the development of the Hasselblad 1600F launched in 1948 and the rest, as they say, is history.

Cameras were also developed for specific tasks. The Williamson G45, a 16mm cine camera, fitted into the wings of fighter planes and synchronized to the machine guns to confirm kills. Other cameras were used for ordinance accuracy and were made by all sides. A post-war example of this type of camera is the Russian S13, which was in service from the late 1940s right up to the 1990s.

As the crews of German Stuka dive bombers blacked out frequently after a bombing dive, an automatic camera was used to record the accuracy and effectiveness of the bomb. Robot modified one of their Model II cameras to take 10m of film and added a large spring motor. It’s thought that only two batches of approx 100 ‘Robot 375’ cameras were made, and very few survived the conflict. It’s reported that the Leica 250 Reporter Motor was also used for this task.

Military requirements meant that the development of many remarkable cameras continued after WWII, including lenses and films for special applications during the Cold War and beyond. This continued until satellites and digital imaging took over. 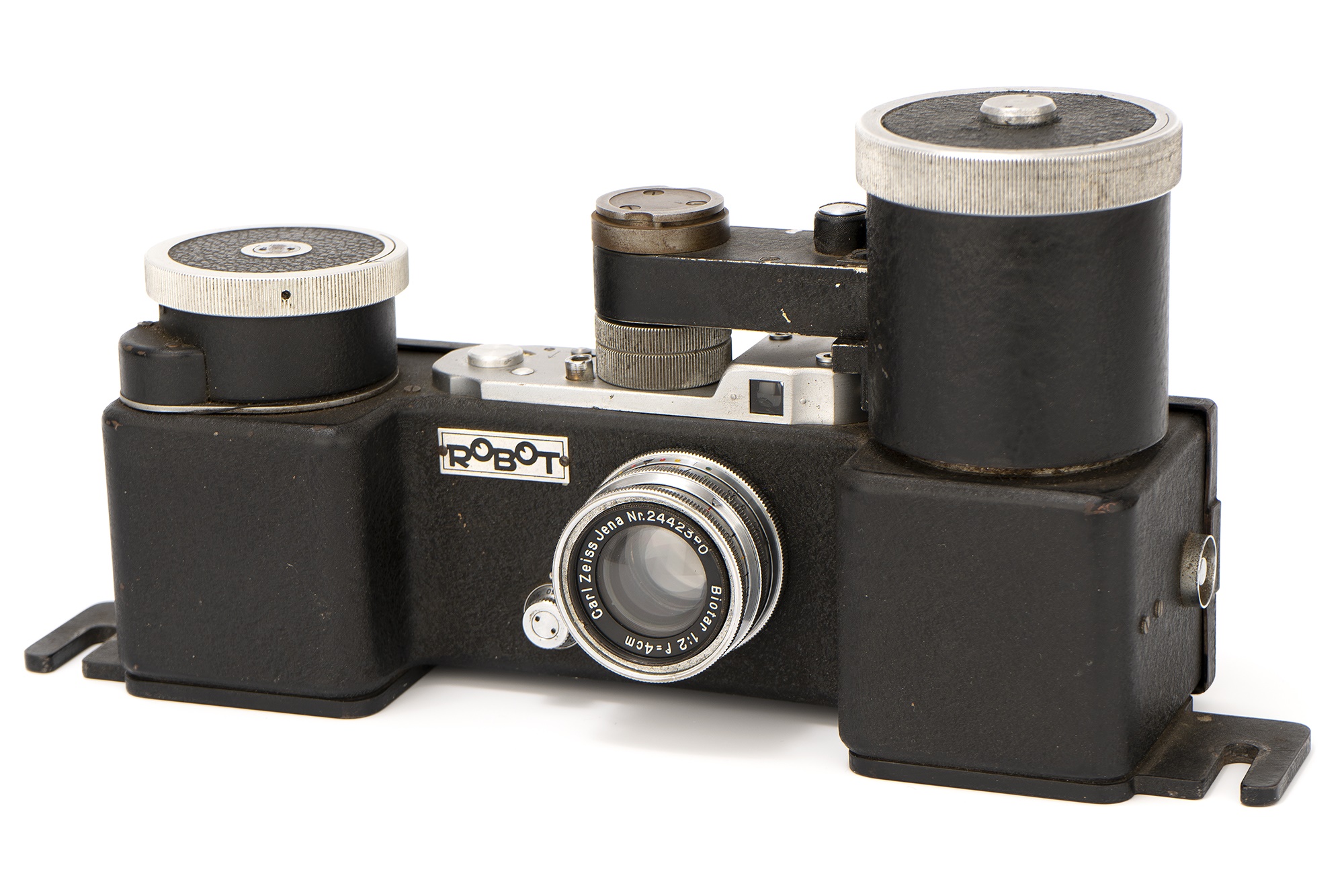 BERNING ROBOT 375 AERIAL CAMERA
Although documentary evidence is scarce, the Berning Robot 375 aerial camera is one of probably only 200 units manufactured in the early part of WWII. Based on the Robot II camera, it has increased 10m film capacity and long run motor. This aerial camera was made to record the bomb strike of a Junkers Ju88 Stuka dive bomber. As an alternative, a motorized Leica 250 was used. However, those now sell for stratospheric prices. Sadly, most Berning Robot 375 aerial cameras were lost in combat and it’s thought that only about a dozen examples remain. This example is numbered D47008, indicating it is the 8th produced in the first batch. 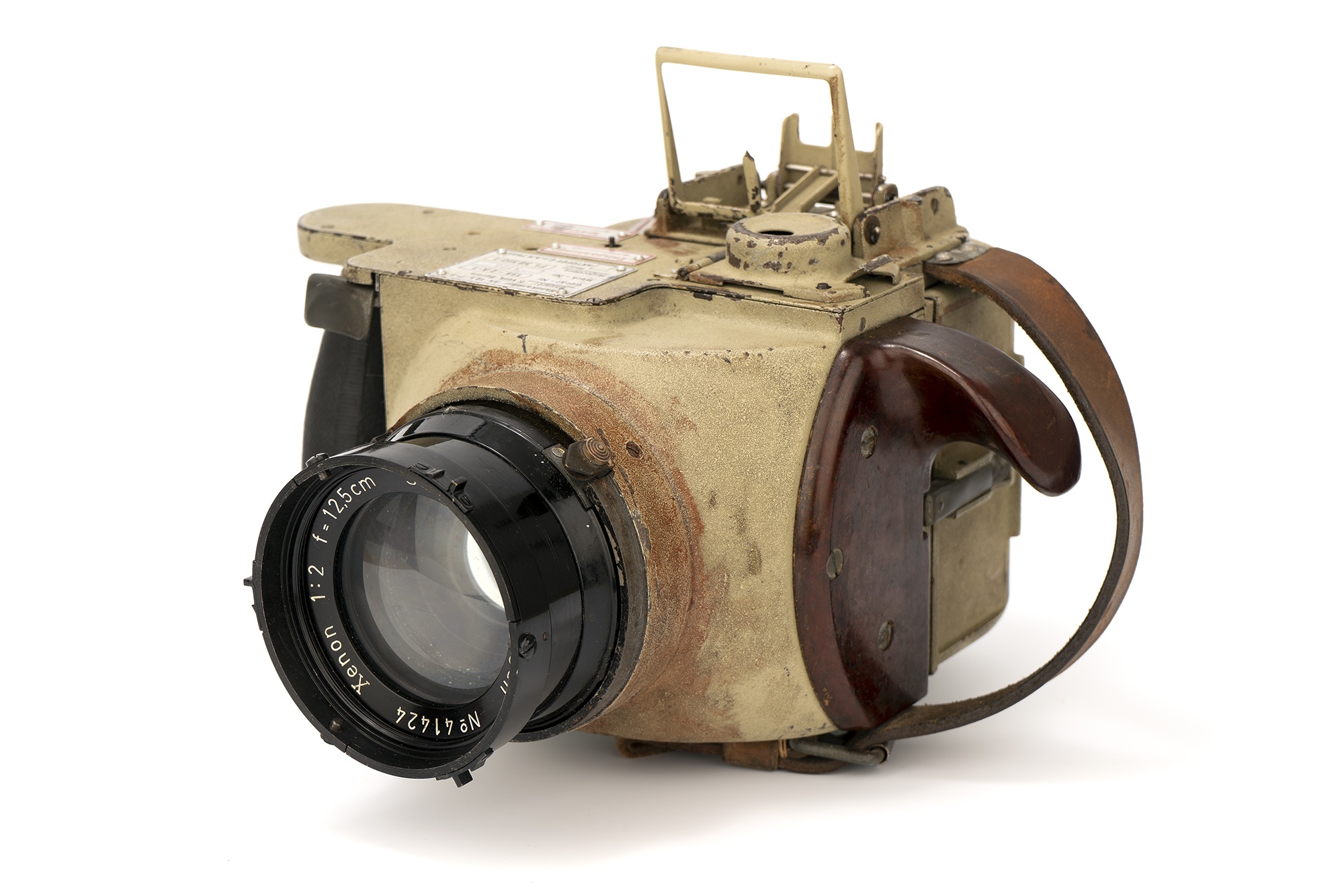 FRITZ VOLK HANDKAMMER
A WWII German handheld large format aerial camera in the original wooden case. The Fritz Volk Handkammer is the camera though to have been given to Victor Hasselblad by the Swedish Government who asked him to make a copy. The Hasselblad HK7 bears a resemblance to the Fritz Volk. It used 80mm perforated film, with frame counter going up to 35. Fitted as standard is the Schneider 12.5cm F2 Xenon lens.

KOMZ C-13 RUSSIAN AERIAL GUN CAMERA
KOMZ (Kazan optical-mechanical Factory) made most of the Soviet military aircraft cameras, initially introduced in the late 1940s and still built into the 2000s. This included a scarce Russian military cine camera, variations of which can be seen over such a long production period. For example, some designated ‘S-13’ and a few had an additional port for a clock image to be recorded via a prism system. Earlier models had a textured crackle finish. However, this KOMZ Russian Aerial Gun Camera was a later one with smooth enamel type paint.

The camera has interchangeable film magazines which accepts 5.2m of 35mm film. Reports suggest that a 1000ASA B+W emulsion was used, with crosshairs engraved into the glass in front of the pressure plate to give reference points. It’s powered by a 27 volt supply from the aircraft. The connecting lead has a manual release switch which and it’s thought that this was connected to the firing button.

A range of lenses were made for the camera. This example includes a 100mm F6.3 FEL-100 with aperture values. Though, most others have ‘Clear-Cloudy-Overcast’ engraved in Cyrillic or occasionally Czech. The main use of the camera was to record the accuracy of machine gun fire for training and target recording. Typically, they were mounted behind a small port above the air intake on Mig-15’s and later models. The FS-2 300mm F4.5 lens is also in this kit, though this wasn’t common. This would have been mounted in a pod to track missiles from Hind attack helicopters. A rare opportunity to acquire a fascinating piece of military history from the cold war period.