Lost at Sea? A Slide Rule to Find Longitude

Navigators have been able to determine a ship’s latitude (position North or South) beyond sight of land since ancient times by reference to the North star. To find longitude (position East or West) was a much greater problem. Following many disasters at sea, the major naval powers offered huge prizes to whoever could discover a successful method.

By the 18th century, there were two potentially practical methods but both needed development. They both rested on being able to compare local time with the time at a known location. An accurate sea-going clock – the marine chronometer – was the ultimate victor, but the other method was by ‘lunar distance’. By measuring the position of the moon against the background stars, with accurate tables and long complex calculations, it was possible to determine Greenwich Mean Time.

In the late 18th and early 19th century, marine chronometers were extremely expensive and in short supply, so the lunar distance method was still used. 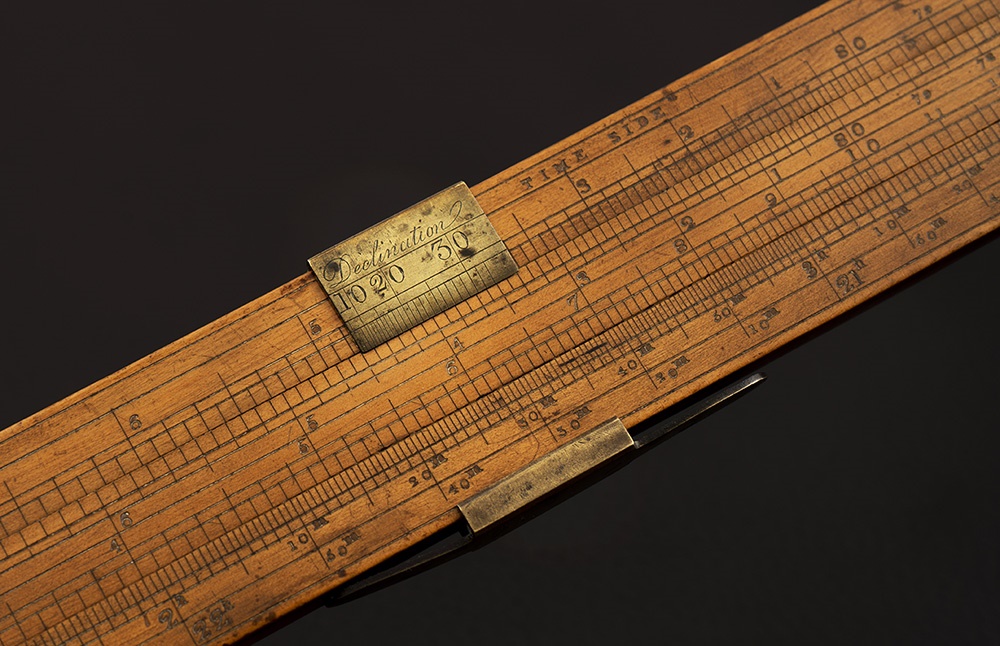 Flints 18th October sale features a Thomson’s Lunar Corrector slide rule, made around 1820. Captain David Thomson (1789-1834) designed a slide rule to reduce the time and labour taken in calculating lunar distance. Bate advertised the rule as available in both two-foot and three-foot versions. These rules are exceedingly rare; we could only locate five other examples, all but one in the collection of a major museum. Four are the three-foot version, one in the Science Museum London, one in the National Museums of Scotland, one in the Whipple Museum and one in Tesseract catalogue 103; only one other, in the Collection of Historical Scientific Instruments Harvard University is a two-foot rule.

We would like to thank Dr David Bryden for his assistance in tracing these other examples and sharing his historical research with us.

The ‘Lunar Corrector’ is just one of the rare slide rules to be auctioned in our October Fine Instruments of Science & Medicine sale. Other navigation slide rules include two Gunter’s rules, one in brass with artillery scales and two ‘sliding Gunters’ – 18th century slide rules with the navigation scales found on standard Gunter’s rules. In addition we have a rare nautical slide rule by Halden & Co, entitled ‘Scale of Power & Speed for Proposed Vessels on Measured Mile Trials. We have a range of other fine slide rules in the sale, including a Major General Hannyngton’s extended slide rule in the larger size.